Posted by kenarno1 on November 21, 2016
Posted in: Entertainment. Leave a comment

This past week I traveled to Atlanta and The Buried Alive Film Festival for the long awaited premiere of “The Night Watchmen.” I gotta say…IT WAS AWESOME!!! We finally got the opportunity to screen the film for a public audience. And what a fun screening it was. Lots of laughs throughout. We also got our first review from a horror blog writer. You can check out the review from Mondo McLaren here: TNW Review.

The festival was a cool experience in the horror fest genre. Our hosts at the festival were incredible folks who made our experience there top notch. We screened at 7 Stages Theatre in Little Five Points area of Atlanta. A cool ass arts district with excellent restaurants and shops. A perfect place for a film fest.

I got to travel down with my co-stars in the film. Dan Franko and Donald Imm. Two guys I’d take a road trip with any time!!! We got there in about 11 hours as we stopped to get Krystal Burgers. My stomach is still thanking me for that one.

Once there we met up with other members of the cast and crew. Dan DeLuca, Mitch Altieri, Kevin Jiggetts, Gary Peebles, Ashley Byrd and Cheryl and Leo Staurulakis. We had a nice little contingent representing our film.

The week started out with a trip to The Vortex for dinner and drinks. You can click on their name for more info on the best burger place in the ATL. The following day we went back there to record one of the most fun podcasts in which I’ve ever been a part. It was a blast. You can listen to it here: TNW on Vortex Radio.

After that we had a poster signing at Criminal Records. A plethora of vinyl and comics all around. A stellar place for a music/comic fan. 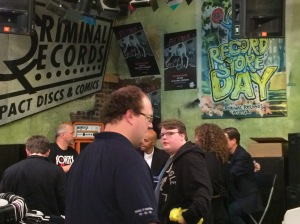 And then we had our screening. I was a bit nervous since this was our first public screening. It was going to be interesting to see their reaction as opposed to a theater filled with friends and family. We had an enthusiastic crowd. And from the get go there were laughs all around. People seemed to really enjoy it and that’s all I could ask for!

When Dan DeLuca and I set out to make this film, that’s all we wanted. To make people laugh and be entertained. I think this film accomplishes that!

The following day we got to tour Shane Morton’s studio…Silver Scream FX Studio! What a cool place. To get a tour from Shane was an experience like no other. His passion for the history and process of special effects is clearly evident. His knowledge of the horror genre is surpassed by no one. And he’s super cool. Glad we got to meet him and see his work first hand. 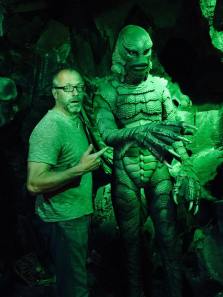 And to top off the weekend we won Best Feature at the fest!!!

Ashley Byrd with our new hardware!!!

We couldn’t have asked for a better PREMIERE!!! Thank you Buried Alive Film Fest and the city of Atlanta!!! The Night Watchmen got your backsides, back doors and your booty!!!